Freiburg, the green southern German city located in the area between the Upper Rhine and the Black Forest, has a good reputation. It is said to be Germany´s ecological capital, situated in the sun belt of the country, the 'German Tuscany'. In fact, many things were achieved here in the ecological field. But 'environmental capital' actually only means that the global processes of destruction in Freiburg proceed a little slower than elsewhere.

The city of 230,000 inhabitants (among them 35,000 students) was frequently awarded environmental prizes, e.g. the titles 'Ecological capital' in 1992 and 'Sustainable city' in 2004. Freiburg won several times the 'national solar league' (there are 1,800 annual hours of sunshine in Freiburg).


This positive development has its roots in the past. Until 1962, Freiburg had been a rather sleepy and conservative catholic city, dominated by the university and the bishop. The city´s position at the edge of Germany and the wars with France had led to the absence of large companies that pollute the environment.

Around 1975 massive ecologically motivated protests came up in this politically rather conservative region. For example, by staging sit-ins the construction of a French chemical factory not far from Freiburg was prevented, as well as three nuclear plants in German, French and Swiss cities close by.

Based on the successful 'No' to nuclear power and the early 'Yes' to sustainable energy sources, regional networks of environmentalists came into existence. Important ecological institutions like the Freiburger Oeko-Institut [Institute of Ecology], the BUND [Friends of the Earth], the party Die Grünen [Greens] and today´s environment and energy companies have their roots in the initial ecological conflicts in the Upper Rhine area for years critical and dedicated people have been generating the political pressure necessary to achieve ecological progress. Freiburg´s ecological spirit influences the city´s election results as well.

After the Chernobyl disaster and at the same time menaced by the French nuclear power station Fessenheim, in 1986 Freiburg was one of the first German cities to adopt a local concept of energy supply in order to protect the climate. The programme included the reduction of consumption of energy, water and resources. Further issues were the use of renewable energy sources and the application of new energy technologies.

The ecologically oriented new district Vauban is a model project in Freiburg. The whole quarter´s construction method follows the main idea of saving energy and space. The several times awarded BUND-Oekostation [ecological centre] in Freiburg is a project of environmental education with nationwide influence.

Those and other encouraging successes are based on the work of dedicated people, like for example 'solar architect' Rolf Disch, pioneer of solar energy Georg Salvamoser, Heide Bergmann of the BUND-Oekostation, Nik Geiler of the AK Wasser [working group 'water"> of the BBU, people that are part of Freiburg´s political life and administration, and committed citizens in the environmental organisations. Another factor is Freiburg´s media scene. Here topics like man and nature, environment and sustainability are reported on more openly than elsewhere.

The citizen´s engagement in environmental politics over the past decades has been profitable ecologically and economically. Leading research institutes of solar technologies are based in Freiburg, as well as a multitude of small and medium-sized companies dealing in various ways with the promotion and application of regenerative energies.

A large number of different ecological institutions have developed from the beginnings of the environmental movement: the Oeko-Institute`s Office as well as the European Office of the ICLEI [Local Governments for Sustainability] can be found here. Furthermore, the Fraunhofer Institute for Solar Engery Systems ISE and the International Solar Engergy Society ISES are based in Freiburg.


Even in an ecological capital not everything that glitters is green. In the beginnings of the 1990s a powerful lobby was fighting on regional and national level for lucrative and ususally oversized waste incineration plants and against the construction of mechanical biological treatment plants. In Freiburg, the skilful and influential incineration lobby won a victory over the supporters of the more cost-effective and more ecological version of waste plant.

Another major ecological topic is the usage of land which still increases significantly. While the population in other German regions is decreasing, the Freiburg region is booming. There is still a strong belief in growth especially in the area around Freiburg. Who would not like to live in the environmental capital, the 'German Tuscany', the nation´s sun belt? So the ecological region´s good reputation itself leads to a vast usage of land, splinter development and disfigurement of the landscape along the Upper Rhine.

The extension of the B 31 road through Freiburg was accompanied by protests but nonetheless enforced with a huge array of police units. Street extension in general leads to more traffic. The city and the region suffer from the increasing transit traffic through Freiburg and on the European North-South route.

While every new and passably sized solar plant is duly celebrated, the waste of 50 megawatts lost heat in the waste incineration plant TREA Bremgarten (where also Freiburg´s refuse is incinerated) is hardly spoken of in the ecological capital. The TREA plant emits an unused amount of heat corresponding to the energy of 120,000 litres of oil every day.

The share of sustainable energies used in Freiburg is still small. Municipal intentions cannot lead to grand results when energy politics of the conservative state Baden-Württemberg are decided upon in the EnBW energy company´s corporate headquarter. Freiburg´s wind energy plans of a sustainable and future-oriented energy supply are prevented by the regional administrative authority.

The risks of genetic engineering are not discussed willingly in the so-called 'Gentech-Biovalley' along the Upper Rhine. Not only at the University of Freiburg people want to profit from both environment protection and genetic engineering.

Ecology, climate protection and the environment still are great topics in Freiburg, in particular when they can used to make money. Nowadays self-discovery and other fashionable subjects that distantly can be connected with environmental politics seem to have gained more importance than the enlargement of the Alsace´s zone of heavy industry. Greenwash, the 'green cloak' for industrial plants that cause environmental damage, is far advanced along the Upper Rhine. Here even the atomic companies EnBW and EDF with Au fil du Rhin have founded an 'environment' organisation controlled by the economy.

Sustainable community and ecological capital don`t automatically go along with 'pushing ahead with ecology and sustainability'. Ecological capital Freiburg means that with lots of effort people succeeded in regionally slowing down the global processes of destruction. But the consumption of resources and energy as well as the production of nuclear waste and carbon dioxid cannot be called sustainable in the slightest. Therefore, they must not be adopted by the 'rest of the world' in no way.

The crucial question concerning the future is the limit of growth. But even in the city of Freiburg there is some hesitation to raise this question.

Freiburg citizens, environmental groups and companies as well as the committed administration achieved many ecological objectives. There are many reasons to be proud of the results achieved, and in crucial fields Freiburg indeed is more environmentally friendly than many other cities. The city has made the first steps in the right direction and others can learn from Freiburg.

But the legitimate pride sometimes leads to a certain laziness, a weakening of efforts and the wrong belief to have reached (almost) every ecological aim. The essential pressure of the environmental movement has decreased as well. So there is no need for Freiburg to lie back, because the ecological capital is still far away from real sustainability. 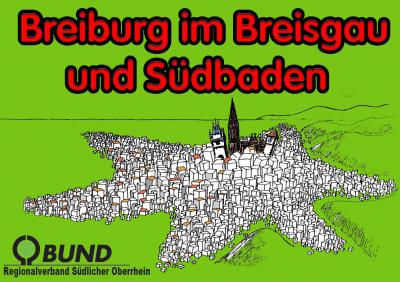